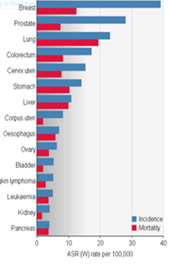 Almost 1.6 million new cases of cancer will be diagnosed in 2011. Over 570,000 people will die of cancer in 2011 in the US.
Most of the morbidity and mortality from cancer is caused by metastases.

Metastases are responsible for most of the mortality in cancer, which claims millions of victims worldwide. Fatal metastases affect patients with all major cancers such as lung, breast, prostate, colon. Patients are left suffering under the threat of relapse after successful primary therapy.